Co-Illusion: Dispatches from the End of Communication

Reflecting Donald Trump’s arbitrary, fitful and unpredictable time in office, the past four years have seen a rash of books dedicated to political interpretation. These range from insider perspectives on the intrigue and infighting that typified the White House during Trump’s tenure to psychopathological accounts of the president himself. David Levi Strauss’s Co-Illusion: Dispatches from the End of Communication is a more imaginative attempt to understand this strange period in American history. The book is divided into two very different parts, which are broadly linked by the idea that the solid ‘facts’ we rely on for consensus and political debate no longer hold meaning for the opportunistic right that Trump personifies – a breakdown at least partly fuelled by new digital technologies. Instead, the Trump regime derived its power from an ever-shifting, opportunistic field of images – both in the sense of visual media, but also images conjured into the minds of viewers through speech, performance and other political displays FIG. 1 FIG. 2.

The first half of the book consists of a series of impressionistic reports from the 2016 presidential campaign. As a historical record, these are interesting purely in terms of the contrast between what seemed very likely to occur four years ago but did not happen – for example, an unstoppable alliance between Trumpian politics and big tech companies – and those that have since come to pass, such as Trump’s simultaneously dependent and antagonistic relationship with the media. This part of the book gains much from Strauss’s eye for the interplay between words and actions and details that more deadline-orientated observers might have overlooked. This detailed analysis of the campaign extends the book’s relevancy beyond the Trump era and to United States politics in general. What might also be particularly striking for British readers is just how unhealthy the self-proclaimed greatest democracy on earth now looks. In the record numbers of the 2020 election, the US still had a lower turnout than most developed countries.

In the second half of the book, Strauss shifts to something more unusual as he transforms the authorial voice into imagined versions of Trump and his retainers. The precise figure ‘speaking’ in each dispatch changes, evoking a variety of supporters, opportunists and enablers: rust-belt Americans who voice their distrust of Washington’s political class, billionaire tech CEOs, a KGB officer and even Trump himself. Although they are seldom explicitly named, the tone and subject-matter of each dispatch makes it consistently clear who the imagined speaker is. The passages voiced by disillusioned Americans are the most effective as Strauss, who was brought up in Kansas, a staunchly Republican state, can perhaps legitimately claim to speak for them, as opposed to those in the media who have tried over the past four years. Others are far stranger and harder to identify. One text ‘spoken’ by a collective voice of social media users comes close to quoting the disembodied voice of the movie camera in Dziga Vertov’s 1923 Cine Eyes manifesto: ‘I choose from among an infinity of choices, I am free because information is free’ (p.89).

Co-Illusion is curious because it is a book about images, or more specifically what Strauss calls ‘a machine for making public words and images’ (p.xiii), but not a book about photographs per se. As such, readers expecting a Straussian dissection of photographic images may be disappointed. The book actually has so little to say about photographs that the discipline does not even warrant an entry in the book’s index. This is a little surprising, not only because of Strauss’s well-deserved reputation as ‘photography’s troubled conscience’, but also because photographs were regular battlegrounds of meaning during the Trump presidency – just think of the column inches that were dedicated to discussing the photographs of crowds at his inauguration.1

This absence is made stranger by the inclusion of work by the Magnum photographers Susan Meiselas and Peter van Agtmael throughout the text. Meiselas’s photographs are reproduced in the first half of the book; they record the national conventions of the two major parties with their bizarre mixture of political pledge-making and entertainment spectacle FIG. 3. There are recurring themes, in particular people caught in the act of viewing images, taking them, or carrying out gestures to be captured as image. Perhaps the most memorable image shows an engorged Trump sign looming over a staged that is adorned with thirty-six American flags and flanked by security heavies, resembling a set from a Leni Riefenstahl film FIG. 4. In contrast, Van Agtmael’s photographs, falling in the second half of the book, focus on a wider array of political events, some during the election and others that followed in its wake FIG. 5 FIG. 6. The images often work in parallel with the texts, for example, a photograph of a Trump supporter at his inauguration, her face uplifted ecstatically, is paired with a text about Trump's ability to speak to the people FIG. 7. These examples call to mind Bertolt Brecht’s image-text juxtapositions, while at other points, the relationship between the two is obscure and seemingly disconnected.

Although the second half of Co-illusion is undeniably the more imaginative, it is also the more imperfect. Although the points Strauss makes are often astute, wrapping them up in faux-Trumpian language verges on parody. There is, of course, nothing wrong with satire, but to mock the public façade of Trump is rather to play him at his own game, which, considering his bombastic persona and borderline delusional view of the world, he will almost certainly win. The missed opportunity, and perhaps the real challenge, is to imagine what goes on behind Trump’s slippery public persona, rather than to emulate it. In addition, although Strauss’s characters deliver grand claims about the specious relationship between images and reality these are neither really developed nor questioned. Instead, they are presented as commonly held assumptions – something that at other points, Strauss seemed intent on demolishing. In his final coda Strauss makes generally interesting points about new media technologies and the way their perceived unifying potential has dissolved, but although this is an undeniably fashionable perspective at present it is also one badly in need of critical reconsideration. Narratives that simply decry mass media technologies as damaging are both overly determinist and also evade the fact that we are now too invested in these digital tools to simply withdraw ourselves from them.

In short, Co-Illusion is an engaging and original book, albeit it one that may surprise readers looking for a more conventional analysis of Trumpian visual politics. Despite only referencing events of the last four years, it already reads like a historical document; in this sense it will only become more interesting with time. One thing it makes manifestly clear is that there is no going back to a time before Trump. As with Britain’s vote to leave the European Union, it may never be possible to rebuild what has been burnt down. However, the positioning of this by many on the left as a triumph of a technocratic right wing wedded to iconoclastic populism also overlooks the equal failure of the opposition – not just to attack, to critique and to hold to account, but also to do something far more challenging: to empathise. 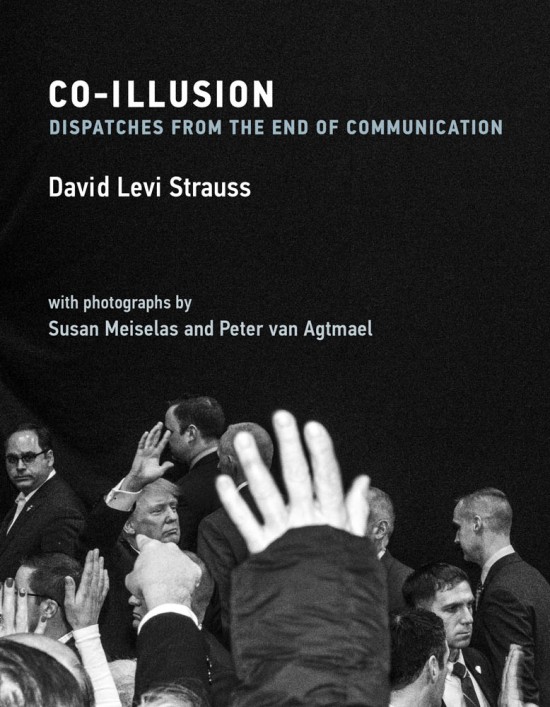 Co-Illusion: Dispatches from the End of Communication

is Course Leader of MA Documentary Photography at London College of Communication, UAL. He works across media and platforms to visualise the activities of powerful agents, organisations and practices.